Encapsula NanoSciences is formulator and manufacturer of hundreds of liposome based reagent kits and custom made formulations for universities, research institutes and biotech/pharmaceutical companies.

Encapsula NanoSciences has extensive collaboration with academic research laboratories and is currently working with synthetic chemists and cancer biologists at a major university in the development of new anti-tumor compounds which require a liposome delivery system in order to be dosed in vivo.

Encapsula NanoSciences is also working with the food technology industry in exploring the development of lipid-based antimicrobial’s as a solution to a variety of food safety issues in that sector.

Encapsula NanoSciences is dedicated to bringing liposome and other lipid nanoparticle technology into consumer products for daily use.

The most common type of lipid nanoparticle, a liposome, can be thought of as a hollow sphere whose size ranges from 30 nanometers to 10,000 nanometers or 10 microns. A nanometer, usually abbreviated as nm, is 1 millionth of a millimeter. For comparison, a red blood cell is about 8,000 nanometers and viruses range from 25 – 200 nanometers. Liposomes are made from phospholipid molecules which are the same molecules that comprise cell membranes. Phospholipids are amphipathic, that is, part of their structure is water-soluble (hydrophilic or water-loving) and the other part is oil-like (hydrophobic or water-fearing or fat-soluble). Therefore, when added to water, the water-soluble part of the phospholipid interacts with the water and the oil-like part of the molecule avoids the water.

In order to accomplish this, the phospholipids align themselves side-by-side with their oil-like portions orienting themselves towards each other as shown in cross-section in the middle figure below. This structure is known as a phospholipid bilayer. This bilayer extends itself in water to form a sheet which then curls into a liposome. Liposomes smaller than about 200 nm usually only consist of one bilayer (unilamellar liposomes) but larger liposomes can contain concentric layers of lipid (like an onion) or several smaller liposomes can be formed inside large liposomes. These larger multicompartment liposomes are known as multilamellar liposomes.

The structure of a phospholipid molecule, a lipid bilayer and a liposome. 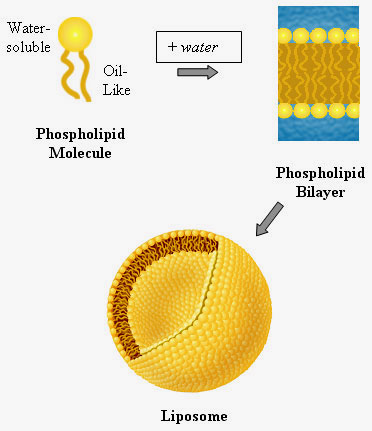 The interior of liposomes is filled with water and therefore, molecules which are soluble in water can be encapsulated in the interior of the liposome. A less recognized but very important property of liposomes is that molecules which are not water soluble, or oil-like, can be entrapped in the oil-like portion of the phospholipid bilayer. Consequently, liposomes can serve as carriers for all types of molecules including both water-soluble and water-insoluble compounds. In fact, a single liposome can carry both types of molecules or combinations of each type of molecule. 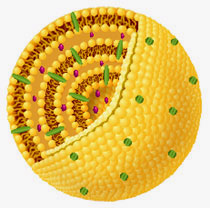 Liposomes can be made of a single type of phospholipid or by mixtures of different phospholipids. Non-phospholipid components such as cholesterol, fatty acids and other lipid soluble molecules such as vitamin E are commonly added to liposomes. By varying the type of phospholipid used to make liposomes and/or by attaching certain molecules to the surface of liposomes, they can be engineered to have many useful properties. Liposomes, with or without entrapped compounds, can be designed to

These are only a few of the applications for which liposomes have been used. Reports of new types of liposomes and as well as new uses for liposomes seem to appear almost daily.

As stated earlier, liposomes are not the only type of lipid nanoparticle that can be used in some of the above-listed applications. Some phospholipids tend to form cochlear structures which can be envisioned as a phospholipid bilayer sheet that is rolled up like a jellyroll; these types of lipid nanoparticles are currently being investigated for oral drug delivery among other applications. Certain drugs and other molecules, often those which have amphipathic properties similar to phospholipids, form bilayer-like complexes with phospholipids resulting in nanosized particles but usually don’t have the capacity to entrap water-soluble compounds. This is not a problem since the compound of interest is incorporated into the nanoparticle structure. The advantages to this type of nanoparticle are that a relatively large amount of drug is incorporated into the nanoparticle and that they provide stable suspensions of amphipathic molecules in water. Amphipathic molecules are often very difficult, or even impossible, to dissolve in water alone. Lipid complex and cochlear nanoparticles are also useful in systems where osmotic stress (very high or very low salt concentrations) is present.

The scientists at Encapsula NanoSciences have experience in all types of lipid nanoparticle systems including selecting the best type of nanoparticle for a particular application.