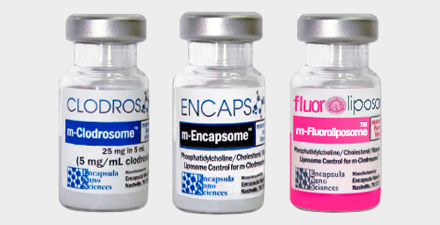 Why mannose? Mannose is one of the carbohydrate components of many bacterial and viral cell surfaces; therefore, the ever-efficient, highly redundant immune system has evolved multiple mechanisms for identifying pathogens based on mannose recognition. The animal and plant kingdoms likewise utilize carbohydrate recognition signaling mechanisms including mannose residues. Many publications evaluate other carbohydrates as targeting mechanisms for various cell types, however mannose targeting to phagocytes appears to be one of the more specific mechanisms identified to date. Mammalian cell surface identification molecules based on mannose binding, such as the ICAM family of leukocyte adhesion molecules, target the SIGN family of mannose receptors to accomplish self-recognition in vivo.

There are five mannosylated fluorescent control liposome products (m-Fluoroliposome®) for m-Clodrosome® (mannosylated clodronate liposomes). All five mannosylated fluorescent liposomes incorporate a lipophilic dye inside their membranes. They are insoluble in water; however, their fluorescence is easily detected when incorporated into membranes. DiI, DiO, DiD, DiR and DiA cover a wide range of excitation and emission wavelengths from 300s to 900s. DiI and DiO have fluorescence excitation and emission maximal separated by about 65 nm, facilitating two-color labeling. The emission spectrum of DiA is very broad, allowing it to be detected as green, orange, or even red fluorescence depending on the optical filter used. DiI, DiO, DiD and DiR belong to the dialkylcarbocyanines family of compounds. The spectral properties of the dialkylcarbocyanines are largely independent of the lengths of the alkyl chains but are instead determined by the heteroatoms in the terminal ring systems and the length of the connecting bridge. They have extremely high extinction coefficients, moderate fluorescence quantum yields, and short excited state lifetimes in lipid environments (~1 ns). The fluorescence spectrum of each dye is shown below.

You can choose the m-Fluoroliposome® based on the type of the fluorescent equipment and filters that you use in your lab. Mannosylated clodronate liposomes cannot be made fluorescent simply due to the potential for inaccurate and/or uninterpretable data being generated by labelled m-Clodrosome®. For more information, please refer to the technical note section.

m-Clodrosome® and m-Encapsome® are both white milky suspensions, and m-Fluoroliposome®-DiI is a pink liquid suspension, all made of large micro size multilamellar liposomes. Due to their large size, some liposomes might settle to the bottom of the vial. If left sitting idle in the refrigerator, m-Encapsome® and m-Fluoroliposome®-DiI will phase separate and form pellets in the bottom of the vial leaving a clear solution on top. m-Clodrosome® might do the same only not as severely. Therefore, both should be gently shaken not to form bubbles but to form a homogeneous solution prior to use.

m-Clodrosome®, m-Encapsome® and m-Fluoroliposome® should always be stored at in the dark at 4°C, except when brought to room temperature for brief periods prior to animal dosing. DO NOT FREEZE. If the suspension is frozen, clodronate can be released from the liposomes thus limiting its effectiveness in depleting macrophages. ENS is not responsible for results generated by frozen product.

m-Clodrosome®, m-Encapsome® and m-Fluoroliposome® are made on daily basis. The batch that is shipped is manufactured on the same day. It is advised to use the products within 60 days of the manufacturing date.