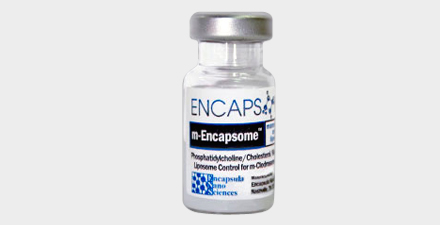 m-Clodrosome® is a multilamellar liposome suspension in which clodronate is encapsulated in the aqueous compartments of the mannosylated liposomes. m-Encapsome® is formulated and prepared identically to m-Clodrosome® except that clodronate is not added to the liposomes. The liposomes are filtered through 2 μm polycarbonate membranes to ensure that larger particles, which may be toxic to animals, are removed from the suspension. Both are prepared and packaged under sterile conditions. When animals or cells are treated with m-Clodrosome®, phagocytic cells recognize the liposomes as invading foreign particles and proceed to remove the liposomes from the local tissue or serum via phagocytosis. The liposomes then release clodronate into the cytosol resulting in cell death. Non-encapsulated clodronate cannot cross the cell membrane to initiate cell death. m-Encapsome®- control liposomes- are recognized and phagocytosed by the same mechanism as m-Clodrosome®. Since the control liposomes do not contain clodronate, the phagocytic cells are not killed. However, phagocytes do respond to the ingestion of control liposomes by cytokine secretion, temporary suspension of phagocytic activity and other responses described in the literature.

Mannose receptor targeting by mannosylated liposomes has been demonstrated for a variety of mannosylated lipid conjugates in a variety of liposome morphologies and compositions in several different in vitro and in vivo models. There are several publications about using a hydrophobic derivative of mannose (4-aminophenyl alpha-D-mannopyranoside) rather than using a mannosylated lipid in clodronate liposomes. This is mainly due to the high cost and complexity of synthesizing and conjugating mannose to lipid. 4-aminophenyl alpha-D-mannopyranoside is commercially available and far less expensive than synthesizing mannose conjugated lipid.

Why mannose? Mannose is one of the carbohydrate components of many bacterial and viral cell surfaces, therefore the ever-efficient, highly redundant immune system has evolved multiple mechanisms for identifying pathogens based on mannose recognition. The animal and plant kingdoms likewise utilize carbohydrate recognition signaling mechanisms including mannose residues. Many publications evaluate other carbohydrates as targeting mechanisms for various cell types, however mannose targeting to phagocytes appears to be one of the more specific mechanisms identified to date. Mammalian cell surface identification molecules based on mannose binding, such as the ICAM family of leukocyte adhesion molecules, target the SIGN family of mannose receptors to accomplish self-recognition in vivo.

Clodrosome® and Encapsome® are standard and non-mannosylated reagents that are used for targeting macrophages in organs and tissues other than central nervous systems. For more information about these reagent see here.

m-Clodrosome® and m-Encapsome® are both white milky suspensions made of large micro size multilamellar liposomes. Due to their large size some liposomes might settle to the bottom of the vial. If left sitting idle in the refrigerator, m-Encapsome® will phase separate and form pellets in the bottom of the vial leaving a clear solution on top. m-Clodrosome® might do the same only not as severely. Therefore, both should be gently shaken not to form bubbles but to form a homogeneous solution prior to use.

m-Clodrosome® and m-Encapsome® should always be stored at in the dark at 4°C, except when brought to room temperature for brief periods prior to animal dosing. DO NOT FREEZE. If the suspension is frozen, clodronate can be released from the liposomes thus limiting its effectiveness in depleting macrophages. ENS is not responsible for results generated by frozen product.

m-Clodrosome® and m-Encapsome® are made on daily basis. The batch that is shipped is manufactured on the same day. It is advised to use the products within 60 days of the manufacturing date.